Museum of the Risorgimento of Castelfidardo 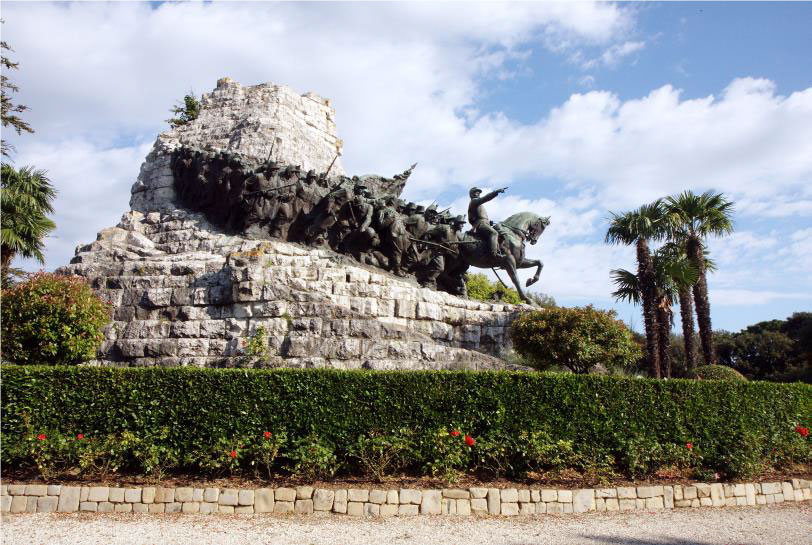 THE MONUMENT TO THE VICTORIOUS SONS

The National monument to the Victorious Sons of Castelfidardo

The monument was built specifically for the 50th Anniversary of the Battle to commemorate the historic event to those who succeeded. Till then it had been testified only by the Ossuary of the Fallen soldiers, located in the battle area, and it was required and realized by the inhabitants of le Marche. The idea of the monument was given in 1902 by the count Ernesto Garulli of Monterubbiano (FM), and was strongly supported by Paolo Soprani, mayor at that time. An appeal to collect the money necessary to build the monument was promoted; it lasted twelve years and included the Italian Government as contributor. With the Law n. 105 of the 17th March 1910, under the Reign of Emmanuel III, the monument was declared of high National Recognition and it was inaugurated solemnly the 18th September 1912.

The tender to build the monument was won by the Venetian sculptor Vito Pardo. He offered his abilities totally for free with the aim to propose an innovative idea of sculpture which enhances the cinematographic perspective: the warlord and his horse are represented on the same level of his soldiers.

The monumental complex, realized in lost wax bronze is almost 6 meters high and 12 meters long. It lays and comes out of a 160 square meters mountain with boulders in white travertine of Ascoli. The masonry into which part of the monument is set was realized by the master Giordani of Castelfidardo.

Inside the monument there is a beautiful chapel, decorated with Savoy knots. With a very ancient Assyrian style, it was built in polished Pietra d’Istria. On the half of both the main side of the decoration and the frame, which completely surrounds it, there is a big plaque overcome by the illuminated altar, whose patriotic light brightens everywhere. The altar shows only one decisive date: 18th September 1860. A beautiful song of Arturo Vecchini is cut with Roman types on the plaque.

HERE
WARLORD ENRICO CIALDINI
OUR EROIC MILITIAS
REUNITED LE MARCHE TO ITS HOMELAND
THEY POINTED OUT THE WAY TO ROME AND OPENING
HERE THE SOLEMN MONUMENT
TELL LIBERATORS THE GRATITUDE OF THE REDEEMED
ANNOUNCE ALL THE PEOPLE
THAT ITALY, RETURNED TO ITS CIVIL POPOLATION
IN WAR AND IN PEACE
ASCENDS

The country itself paid an amount of 50.000 Lire to contribute to the construction of the monument. The MP Sonnino, Minister of the Interior of that time, forced the Parliament to vote a special law and obtained to place on the opposite wall another plaque saying:

With this masterpiece Vito Pardo, apart from making a real swift in the sculpture style of the time, wanted to represent the suffered journey of the Italian Unification and of its people: a population which, from being an unshaped and divided mass, becomes a united nation and a united community. Passing through political and religious intrigues, from the Alps to Sicily it was reunited under the same green, white and red flag.

The hill (10 hectares) was proclaimed natural park by planting more than 22.000 conifers and native plant trees, with pathways, fountains, benches and staircases. Many women of the surrounding areas personally looked after the dense plant life, collecting water from the springs of the Concia and Cenciarello located on the valley of the hill, and bringing it to the park.

The access paths to the monumental park are controlled by solemn gates in wrought iron. They are called “Gates of the bay tree” and were realized on the project of Vito Pardo in 1925 into the laboratories of the blacksmith Pietro Meci of Moresco (FM). On the top of the columns there are the emblems of the provinces of Ancona, Macerata, Pesaro, Ascoli Piceno, Castelfidardo and the fascist emblem without the hatchet, whereas in their inside there are the emblems of the provinces of Zara, Trieste, Trento and Fiume.

Just behind the right side of the monument there is a square called “of the memories”: along the surrounding avenues it is possible to find commemorative plaques in memory of the fallen soldiers of both the First and the Second conflict, and of the battles for the Italian Unification.

The original sketch of the masterpiece realized in natural size (showing just the General Cialdini and the first soldiers), is nowadays exhibited at the “Central Museum of Risorgimento” at the Vittoriano Complex in Rome. This enlightens the importance of the Battle of Castelfidardo for the Unification of Italy.

Since 2011, thanks to a project conceived by the Association of Carabinieri on indefinite leave section Cap. Gentile in cooperation with the Academy of fine arts of Urbino, the monumental group is surrounded by the “Sculpture park of the Fathers of the Homeland”. The various figures realized in bronze lay on a basement that is 1,20 cm high and constitute an historical and artistic path which is dedicated to the protagonists of the process of National Unification.

The Museum of the Risorgimento of Castelfidardo

Manage Cookie Consent
To provide the best experiences, we use technologies such as cookies to store and / or access device information. Consent to these technologies will allow us to process data such as browsing behavior or unique IDs on this site. Not consenting or withdrawing consent may adversely affect some features and functions.
Manage options Manage services Manage vendors Read more about these purposes
View preferences
{title} {title} {title}